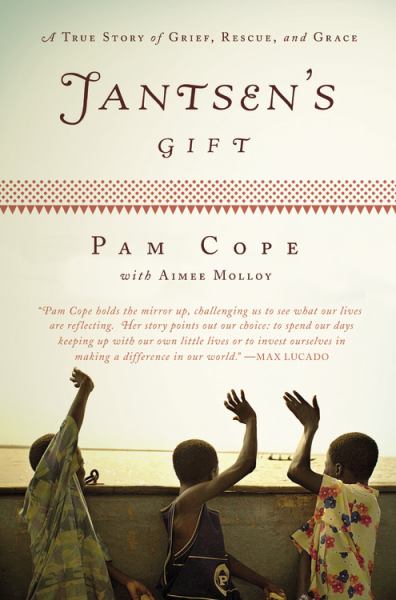 Jantsen’s Gift: A True Story of Grief, Rescue and Grace was released in April of 2009 to critical acclaim.

Jantsen’s Gift is available for purchase at online vendors like Amazon.

Pam Cope read a New York Times article in the fall of 2006, inspiring her to take action and save children from slavery in Ghana, beginning with Mark Kwadwo. Through their Global Family and Find Your Mark community, Touch A Life now encourages others to experience the rewards of giving and  teaching the next generation about the worldwide need to eradicate child slavery and empower vulnerable children throughout the world.

After Oprah Winfrey learned of the work Pam did to rescue Mark and six other Ghanaian children, she invited her to be on her popular talk show, “The Oprah Winfrey Show.”

Since 2007, Touch A Life Foundation and the Cope family have been featured in Reader’s Digest, a New York Timesfollow-up article, Parade Magazine, Essence Magazine, and multiple other venues to discuss Jantsen’s Gift.

From Readers of Jantsen’s Gift:

Jantsen’s Gift is one of the best books I’ve read in years. I couldn’t put it down until I finished it. It’s inspiring on many different levels.

A most heart-wrenching book! I couldn’t put it down – so my family had to wait for 24 hours while I read it.

The book is life-altering. The realization that a few dollars can help people is so enlightening.

It is so touching, so true, and just really a good book. I have told everyone to get out there and buy the book. Pam, you have touched so many lives in so many ways.

I just got my copy yesterday and I couldn’t put it down! This book really is amazing! Thank you, Pam and Randy, for taking the time to tell your story…

This book touches on so many great things – self-empowerment, transformation, turning tragedy into something beautiful. It also happens to be funny, sad, touching, and you can’t put it down! After I finished it, I immediately thought of at least five friends to recommend it to – it’s that kind of book. Women (and men) need more of this sort of inspiration! A great read.

I was completely moved by this book. It was a joy to read – entertaining and funny, thought-provoking and poignant. It makes you think differently about everything – what’s important in life and what isn’t. And it makes you realize just how much one person can do to affect change. I was enthralled from page one and found myself loving and rooting for Pam Cope all the way through. Most importantly, though, it made me notice my privilege even more clearly and want to help people in need. This is the most powerful byproduct of such a great read!