Amy Liddy, a long-time child sponsor and Touch A Life supporter traveled to the Care Center in August for the first time. During her time in Ghana she met Bernard, the child she has sponsored with her family for the past four and a half years. We are so glad that Amy agreed to share the story of her life-changing Global Family experience.

In February of 2012, I watched an episode of Super Soul Sunday on OWN. On the episode, Oprah interviewed Pam Cope, the co-founder of Touch A Life. Pam spoke passionately about her book, Jantsen’s Gift, telling the story of the loss of her son, and how an article in the New York Times launched her into action to save the son of another. She spoke from the heart about the work being done by Touch A Life to free enslaved children and provide a home and a safe life for them. I was so inspired by the work that she and her husband were doing, I remember being overcome by a feeling of gratitude.

My siblings and I had been trying to come up with a way to honor the memory of our brother, Matt, who had passed away in January of 2010. In a quiet moment following the show, I knew that sponsoring a child at the Touch A Life Care Center in Ghana was something that Matt would have been thrilled about. He spent his entire life as a swim coach and mentor. He had a positive impact on many children and young adults in his career, including one of his college athletes, Leonard, from Zambia. Leonard, like all athletes from oversees who could not go home for holidays, was welcomed into Matt’s home and family. Like Matt, the Touch a Life Foundation has a significant positive impact on the lives of children. This was the perfect way to honor Matt’s life.

I contacted the TAL office to be paired with a child in need of sponsorship. Within days, we were sent photos and a biography telling us about Bernard. I instantly knew that we had made the right decision. My father’s name is Bernard. As we were growing up, he told my siblings and I that if anyone ever named their child Bernard, that he would pay for their college education (he was joking, I think). Even with that sales pitch, my father did not end up with a grandson named after him. So, we were thrilled to be sponsoring a child named Bernard. My father had a namesake grandson!

Since 2012, I knew that I wanted to go to Ghana to meet Bernard. I was so grateful that we were able to write letters to one another, and to learn that Bernard was happy, healthy and safe. I would ask the people at TAL to tell me anything they knew about him. I was told that he was a quiet leader, a good friend to all and looked up to by the younger children. In my heart, I cared for a child that I had never met but knew that I would meet. I longed to let him know in person that I was here for him and that I cared. In the meantime I was so inspired by all of the work that TAL was doing at the Care Center for all of the children, there has been so much progress there in the few short years it has existed.

In 2016 I knew that I was going to finally make the trip to the Care Center to meet Bernard. I was able to write him a letter in April to say that I was coming to Ghana! As the trip grew near, I was unable to contain my excitement! I was really going to meet Bernard and see the loving home that TAL has provided to 77 children. My family and friends were as excited as I was! 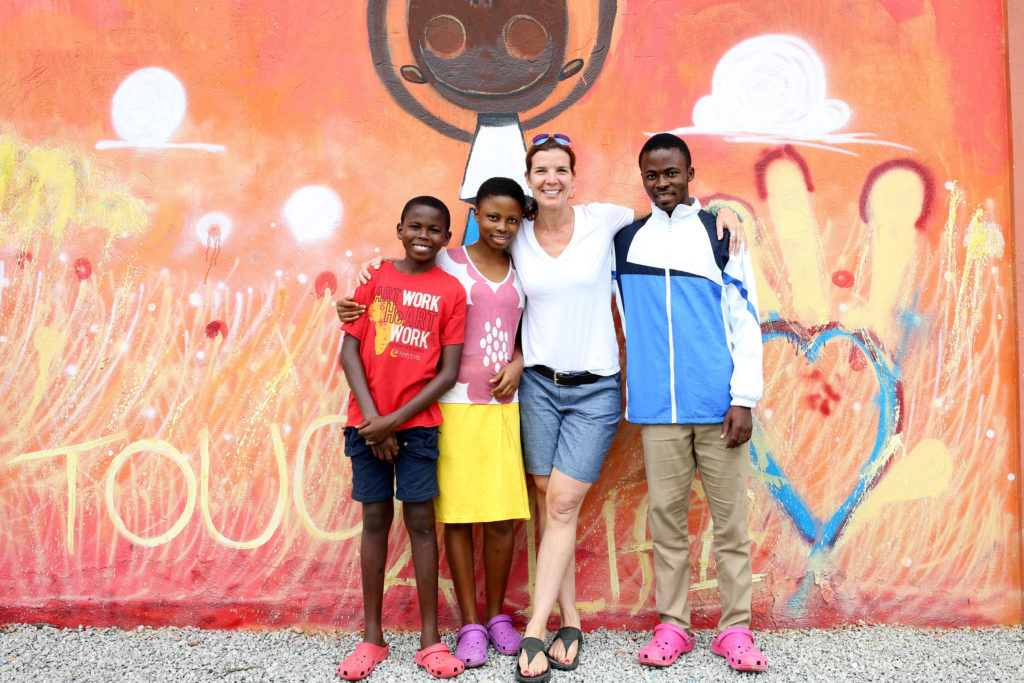 Amy with Bernard and his younger siblings, Comfort and Benjamin.

A few days prior to going on the trip I wrote down two intentions that I had heard: ”Offer sanctuary in your heart” and “The world is my family.”  I took the piece of paper and put it in the book that I was reading while traveling and opened the book to look at the words daily.  They seemed to be the perfect intentions to set for the week in Ghana.  Not knowing what Bernard or the other children would need or want from me, I thought I can make my heart a safe place for them to rest if that is what they would choose. However, since it was my first trip, I didn’t know how I would relate to the children, especially Bernard since he is a young man.  The moment I stepped off the bus on the first day and saw the incredibly warm smiles of the children, I knew that I was exactly where I was meant to be. It took a few minutes of looking but I found Bernard and he found me, and we hugged a hug that had waited four and a half years. I have a saying that I like to use when I feel something even close to that…I say out loud “I love this moment.”  We spent the afternoon getting to know each other better. Bernard told me about his friends, about school, and about his goals. I learned that he is a quiet leader, humble, focused, grateful and loved by the other children. I couldn’t help but feel proud of the exceptional young man that he is today.

The following day, I was talking with Bernard and Ma Paulina in the outdoor kitchen, a place I gravitated to often. I told Ma Paulina that one of my favorite things to do is to cook for people that I love, even better is when I get to cook with people I love. She looked at me and said “Ok, tomorrow you will cook Bernard’s favorite food with him.” Her kindness made my heart feel so full. The next day I found myself in the kitchen with Bernard making boiled yams with tomato stew and avocado. Bertha and Evelyn were in the kitchen with us, helping us and teasing us a bit as well. It was a joy-filled afternoon! 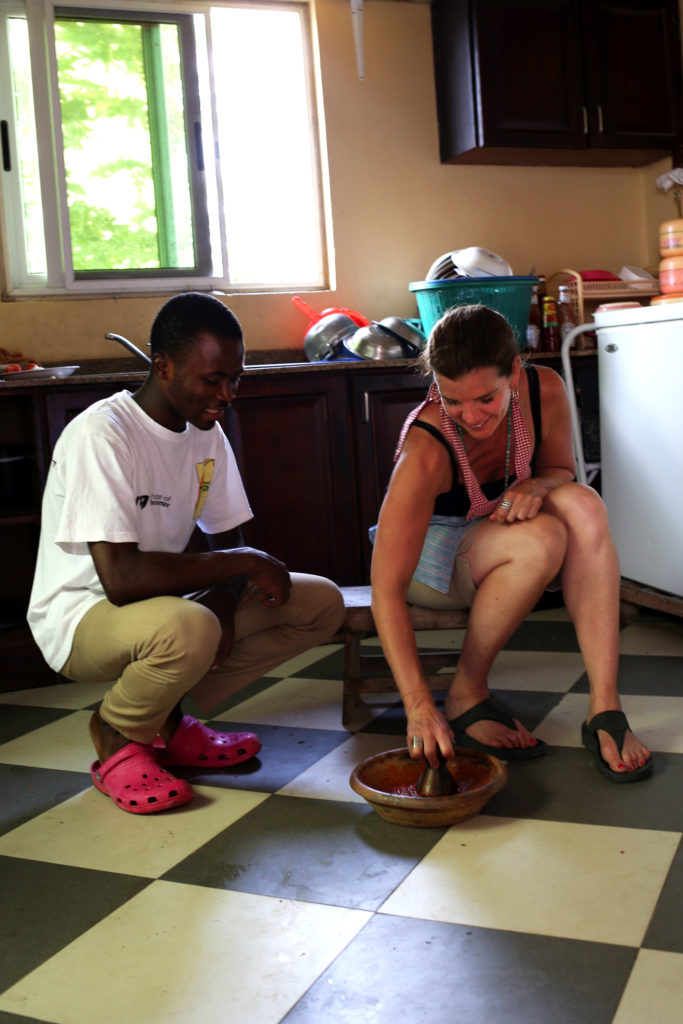 Amy cooking in the Care Center kitchen with Bernard.

Later in the week I was walking with Bernard and I asked what kind of music he liked best.  He said gospel and asked if I’d like to hear one of his favorite songs. He played Here with Me. As I stood there next to him, listening to the beautiful song that he wanted to share, in the place where he is loved and safe and happy, the gratitude was too great and tears ran down my face. And I thought, “I love this moment”. Then I thought, “Thank you Matt for leading me to it and to Bernard.” 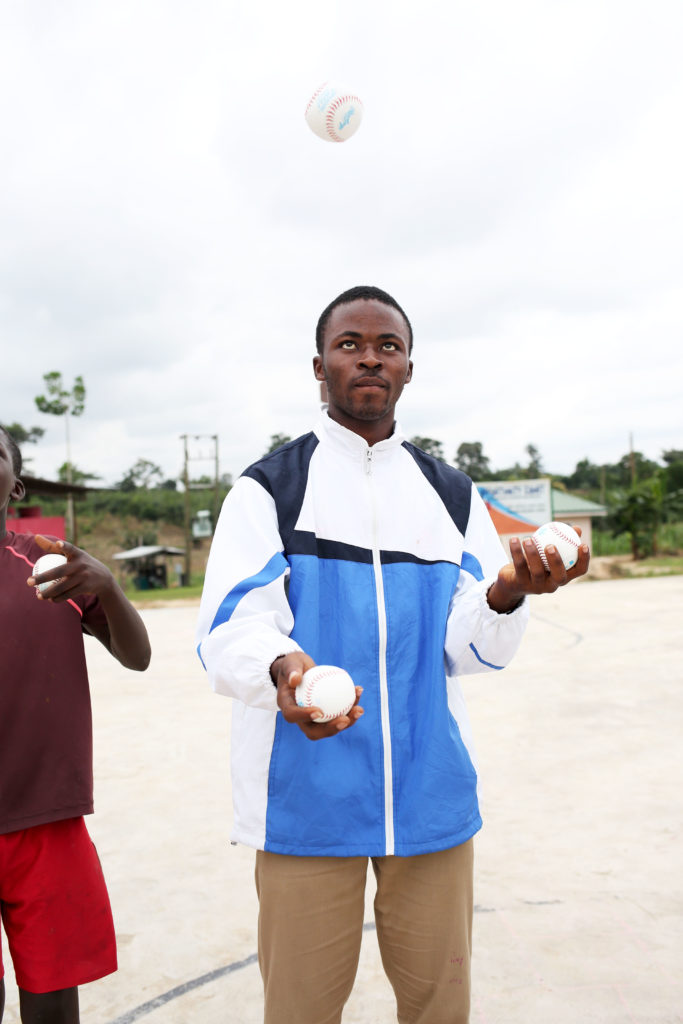 Bernard practicing some of the juggling skills that Amy taught him.

I am happy and proud to be another mom who loves Bernard.  I am grateful to have finally met him in person. He and I are part of the beautiful Touch A Life Global Family where each heart is a sanctuary for all others. 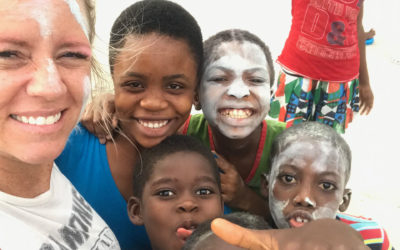 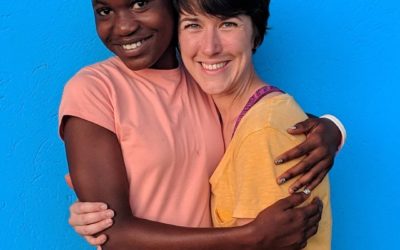